Mentioned in "IMF Key Issues", "April 2018 IMF Fiscal Monitor" and "UK Parliament Fiscal Risk Report"
​
A key objective of fiscal policy is to maintain the sustainability of public finances and avoid crises. Remarkably, there is very limited analysis on fiscal crises. This paper presents a new database of fiscal crises covering different country groups, including low-income developing countries (LIDCs) that have been mostly ignored in the past. Countries faced on average two crises since 1970, with the highest frequency in LIDCs and lowest in advanced economies. The data sheds some light on policies and economic dynamics around crises. LIDCs, which are usually seen as more vulnerable to shocks, appear to suffer the least in crisis periods. Surprisingly, advanced economies face greater turbulence (growth declines sharply in the first two years of the crisis), with half of them experiencing economic contractions. Fiscal policy is usually pro-cyclical as countries curtail expenditure growth when economic activity weakens. We also find that the decline in economic growth is magnified if accompanied by a financial crisis.

Market Expectations of Shadow Bank Systemic Bailouts Implied by OTM Put Option Basket-Index Spreads
Shadow Banking and Systemic Bailouts [Under Revision]
​
We study the impact of systemic bailout expectations on bank credit growth patterns. Using daily put options data of U.S. bank holding companies, we measure each bank holding company's exposure to the systemic bailout factor, which is the sensitivity of each bank's out-of-the-money put option price to the variations of sector-wide put option basket-index spreads. We show that low market expectations of the banking sector systemic bailouts played a significant role in the weak bank credit recovery after the subprime crisis. Bank holding companies with higher pre-crisis exposure to the systemic bailout factor experienced larger post-crisis deviations from the pre-crisis bank credit growth trend. Perhaps surprisingly, such pattern is persistent even for banks that are less affected by the post-crisis financial regulations and less exposed to borrowers from the deteriorating sectors. Furthermore, we drill down to the commercial bank subsidiary level data while controlling for parent bank holding company fixed effects. This analysis reveals that commercial bank subsidiaries within the same bank holding company present same credit growth patterns even though they have different exposure to financial regulations and deteriorating sectors. To rationalize the empirical findings, we propose a model with both commercial banks and shadow banks. The securitization market, which connects the two types of banks, determines how market expectations of systemic bailouts to shadow banks affect the credit origination capacity of the whole banking system.

​This paper studies the effects of government interventions towards bank non-performing loans (NPLs) during the aftermath of banking crises. Following the narrative approach, we constructed a cross-country database of government intervention plans for reducing NPLs. The database documented 72 systemic banking crises since 1990 and most of which are followed by direct capital injections or NPLs purchases that are conducted by the government. we expanded the existing banking crises database by providing detailed amount of direct capital injections and NPLs purchases based on IMF country reports and each country’s central bank reports. Cross-country regression analyses show that both plans contribute to higher long-run growth in credit and output. Fiscal outlays on either capital injections or NPLs purchases with 1% of crisis year GDP are followed by an additional 0.5% annual credit growth and an additional 0.12% annual output growth. In addition, direct capital injections lead to faster recoveries in credit and output in emerging market countries, while NPLs purchases with lower haircut lead to faster growth in advanced market countries. However, these intervention plans are costly, as they significantly increase the public debt. Fiscal outlays with 1% of crisis year GDP are followed by an additional 0.3% increase in the public debt ratio in the short-run, and such effect is stronger if the haircut in NPLs purchases is higher. Despite the short-run fiscal cost, we do not observe significant long-run fiscal impact after both intervention plans, which implies that government bailouts to the distressed banking sector barely cause long-term fiscal burdens. ​ 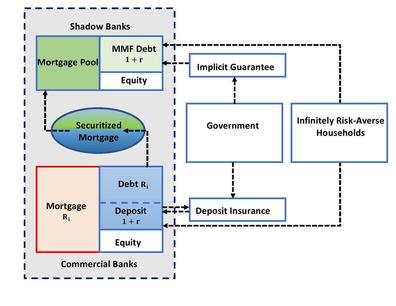 ​We study if the heterogeneity in bank fundamentals contains information about future credit-related macrofinancial stability risks. We present our analyses based on (i) country-level measure of "riskiness of bank credit originations" and (ii) bank- and syndicated loan-level evidence of bank risk-taking patterns.